When describing this elegant monowheel cycle – the word “bicycle” seems somehow inappropriate, even though there are two wheels involved.  This photo dates back to 1869. It was built by Rousseau of Marseilles.

In 1869 the craftsman Rousseau of Marseilles built this monocycle, which perches the cyclist on the inside of a 2 1/2 yards-high wheel. As there is no steering mechanism, it makes uncommon demands on the rider’s sense of balance.” (from Galbiati & Ciravegna)

Presumably the bigger outer wheel made bumps in the road easier to negotiate; compare the popular penny-farthing or “ordinary” bicycle. What it does not have is the gearing-up given by the large wheel of a penny-farthing.Note the solid rim- this is before pneumatic tires were introduced. There is no gearing and no steering. There is a brake, operated by twisting the handlebar forward. This pulls a strap that causes the curved lever to press against the rim of the inner wheel.

The machine is in the Museo Fermo Galbiati, Via Mameli 15, Brugherio, Milan, Italy. (A bicycle museum)

This surprisingly modern-looking monowheel is in the Velorama National Bicycle Museum in Nijmegen, Holland. It is actually a replica of an original built by W. Jackson & Co, Paris, France, in 1869. It is not currently clear if the replica is based on original components of the Jackson monowheel.

The diameter of the wheel is approximately 1.65 metres (5 ft 5 in). The monocycle is treadle driven, the treadles being connected by rods to cranks on the axle of the inner driving wheel. This wheel runs in a semi-circular groove on the the inside of the inner rim of the main wheel.

W. Jackson et Compagnie of Boulevard Malherbes 36, Paris, advertised regularly in the short-lived cycling magazine, Le VÃ©locipède IllustrÃ©. (It only ran from spring 1869 until the outbreak of the Franco-Prussian war in 1870)They appear to have been sales agents rather than manufacturers since they offered all kinds of cycle: velocipedes, tricycles, quadricycles and the monocycle. Each one of their adverts carried an engraved picture of the week’s offering. The monocycle was featured in the edition of 24 July 1870 at a price of 300 francs; this advert was the basis of the replica at Velorama.

There is no information beyond the picture itself, taken from a book of copyright-free images, and this is probably just a concept. For example, the idlers inside the main wheel are not spaced enough around the circumference to keep the inner carriage in place.

Note the two stabiliser wheels attached to a transverse leaf-spring.

This picture comes from the letterhead of one Gaily Musselh. It appears at the top of a letter addressed to Alfred D’Harlingue, but has a two-bladed pusher propellor, and is a close approach to the Coates patent, apart from the size of the engine

French monowheel built in Paris by Erich Edison-Puton in 1910. It has been restored by Ferdinand Schlenker of Sexau and is fully operational, being frequently demonstrated by Mr. Schlenker in the Museum carpark. The engine is a 150 cc single-cylinder De Dion giving 3.5 HP.

The machine is in the Auto & Technik Museum, at Sinsheim in Germany. Another very early motorised monowheel.

It is not really clear if the propellor was accurately pictured or not- it doesn’t look like a standard aeroplane propellor, but then it was expected to produce thrust at a much lower forward speed. The prongs at the front are clearly intended to stop the propellor from striking the ground.

This version appears to swivel the whole engine for steering purposes. It doesn’t appear to be a good way to get a small turning circle.

This picture comes from an unidentified German newspaper dated 16 June 1978. The caption reads: “No shortage of curiosities at the ‘Old-Timer Exhibition’ in Düsseldorf, where about 100 vehicles can be seen. Here is a French ‘Mono Cycle’ from 1927, which ‘put-puts’ along the roads at a maximum speed of 10 km/h.”Well, 6 mph should be safe enough. As we have seen, many monowheel builders were claiming quite unbelievable speeds.

He was apparently on a journey to Spain- there is no info on whether he got there. At any rate, he looks cheerful enough here. It was assumed that this machine was Gerde’s invention, but it now looks as though he may simply have been one of the customers- and there were probably not that many- of the Motorouta company.

For some time it was believed that this is Jumpin’ Joe Gerlach, on a circus machine fitted with a 160cc Honda engine, but it is now clear it is really Hubert Brosche on a restored 1924 circus monowheel.He provided the following details; Engine: 250cc Horex Columbus (1924) & Buhrmann Gearbox. He restored the wheel in 1988 and rides it at different shows/TV events. 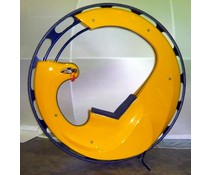